skip to main | skip to sidebar


"Having many things to write unto you, I would not write with paper and ink: but I trust to come unto you, and speak face to face, that our joy may be full."
2 John 1:12 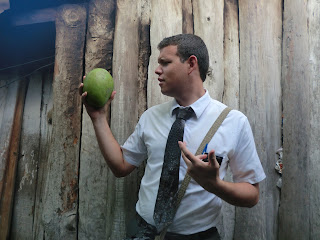 This  is the biggest mango I've ever seen!

We had transfers in the area!!! I received a new companion named elder Davis from Provo. Hes the exact opposite of what I had in mind of those from Provo, he definitely isn't one of the Peter Priesthood guys. We get along really well. On Friday we were buying a bag of water in the mini store and some guys came over and started bugging us for money. I told him that I couldn't give him money, but he could have my unopened bag of water. He looked at it and refused and kept of asking for money. We told him, "sorry we can't" and he got offended and started saying things about the missionaries and stuff. So after that little incident we turned the corner and I was a little frustrated how that guy only wanted money, even after I offered him water. I started to think, "Why can't we just find someone super excited to learn from us and be a disciple of Christ?!" Then, about a split second after that, a man pulled up on his bike in front of us and asked what church we were from. After talking to him for a bit we asked him his name and he said his name was Juan de Dios. A little "hallelujah" went off in my head and I sort of laughed at myself. "Juan of God"? He told us that he has been looking for a church to go to with his family. We asked him where he lived and he told us he lived in Los Robles, which is 45 min away walking distance. So we put an appointment to find him the next day before he left. We just stared at each other and smiled and knew it was going to be a great family.
So we headed out there the next day and he and his family were there waiting for us. There were 8 people that lived in that adobe house! we were shocked. So we started talking to them and turns out that Juan de Dios and his wife were baptized in the church 15 years ago! His family sort of lost contact with the church after having to move so many times. They have 6 children, one is 22, 15,14,13,10 and the smallest is 5. They started to tell us how grateful they were and that they wanted to get baptized. We went to pick them up on Sunday in the Bishops truck and they all went. Juan told us that when he saw us on Friday, he was about to give in on life. Someone had stolen his work truck and 10,000 Limpiras just before that and he was thinking of selling his house and packing up with his family again, but he saw us and had a really strong urge to talk to us. He recognize the Name Tags and new that we had the way to receive the blessings that he had before so that he could help his family.

Posted by threetoadsandaprincess at 4:49 PM 0 comments 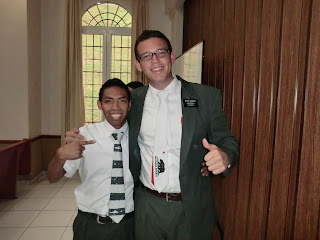 Elder Garcia, my companion from my first area in Nacaome﻿ 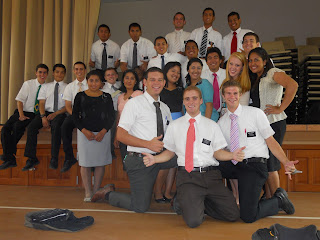 This is a picture of us as a zone with the AP Elder Clay in the middle.
﻿ 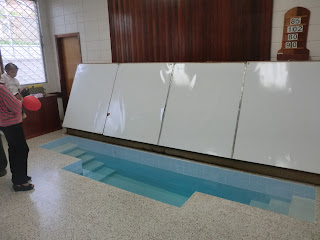 This is an unusual place for a baptismal font. It's built right underneth the podium!﻿

Posted by threetoadsandaprincess at 4:37 PM 0 comments 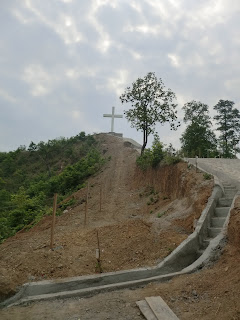 We climbed to the top of this hill to this giant cross here in Danli. It was a really steep climb! 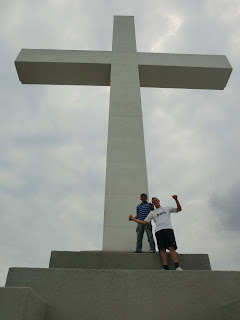 Me with my companion Elder Del La Cruz. 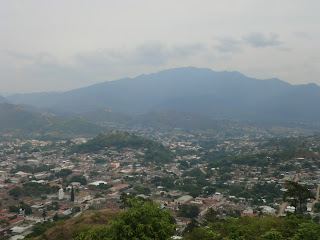 A view of the area of Danli La Concepcion.
Posted by threetoadsandaprincess at 4:07 PM 0 comments 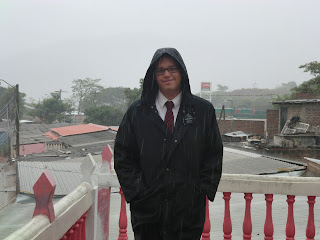 I don't know how but this week flew by fast but we had a ton of appointments and Investigators fall through. We've lost contact with a couple of them and the others aren't progressing. The good that come from this week was the fact that we had a baptism!! Our investigator, Isidro, was baptized and married this last weekend. He was married to a member and they have already made plans to go to the temple when he has a year of being a member. He's great, he has been eager to learn each of our appointments and is a fast learner, always wanting to learn more. We also contacted a referral from a member last Sunday and they are also looking positive. Its a complete family and they live right in front of the church. Its always the people that live closest to the church that are most interested in hearing from us.


They say that the summer has ended here and that we are moving into the winter and rainy season. Starting tomorrow they say that we will be having some storms...I hate getting my socks wet!
Posted by threetoadsandaprincess at 3:18 PM 0 comments

This week it rained on Thursday. We were walking to our appointment and it started to sprinkle a bit. But as soon as it started coming down harder, the power went out! So we were stuck in a torrential downpour with no power. We went to our appointment, but they weren't there. So we walked all the way back to the house. By the time we got back, we were completely soaked. I hate how these storms just come out of nowhere! It was nice and sunny in the afternoon but then turned into a storm. Tegucigalpa was beat up pretty bad. A lot of houses were flooded there. But here in Danli, it didn't do much damage. Our shirts were stained from the rain with a pinkish, red tint it was strange. I did not enjoy getting soaked this time around. my shoes didn't dry out until 2 days later.
The temple was great, it was my first session in Spanish.

The cook family that we eat lunch at has 3 boys and an older daughter. The two younger boys are 4 and 7 years old. Both of them are always coming up to me and asking me if I know how to beat levels and get stars on the Mario Nintendo 64 game they have. When we walk in, they always yell, "Harding! Mi Favorito! I need help finding this star." and they just go off talking about where they need help and ask me if I have beaten it before. The family always laughs when they ask because they always talk about asking me for help when we aren't there. It was a flash back for me and thinking how Max would ask for help on the super Nintendo or Donkey Kong or the wii
Posted by threetoadsandaprincess at 4:34 PM 0 comments 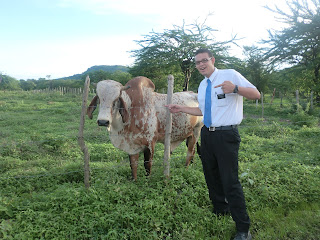 This week went by fast, I cant believe that the transfer is over along with the month! Moving into May! This next month should be successful.

There is a High Councilor in our ward name Victor, he's a cool guy. He's 27 and is a huge help to us. Whenever we need help with teaching someone or trying to get someone ready to go to church, we call him. We went with him to teach and every time he teaches, I always learn something new from what he says. Hes a genius! Whenever we tell him what our investigators need he immediately has a story or a creative way in teaching. I explained to him that they were having some doubts about the Libro de Mormón and he helped us out a ton! He had a lot of interesting facts that got me thinking in many other things. He started out explaining how there is a Formula for everything. He started out by explaining about Chemistry and the different formulas, then he started explaining about day to day life how there are formulas we do everyday like; in order to wake up in time you need to set the alarm and go to bed early. That's the formula to waking up early. To make Cool aid, at water then powder and stir it all up. That's the formula to making Cool aid. Now, the formula to living longer on the Earth? Its right there in the 10 Commandments; "Honor thy Father and thy Mother and thy days upon the land shall be increased"(paraphrased not exact wording). The Formula to heal those that have demons, Prayer and Fasting. Its all there! The world is just full of Formulas! Then he went on the the Libro de Mormon, how can we know that it is the word of God also? In the Introduction it "Invites" all to read and to pray to God with real intent, wanting to know the truth. That's how anyone can know the truth about what we are preaching. They took in well and are willing to read and know for themselves.

He also told us about an experience he had while on his mission in Costa Rica. He was walking in the street with his companion and a woman called them over and she said that she had a dream and there were 2 missionaries that looked just like them with the name tag and ties. She said that in the dream she was talking to her pastor and after finishing their conversation the pastor says, "oh, and sister, the milk comes from the Bull." And in her dream, she stood there shocked and said, "No, the milk comes from Cows, not bulls." And the Pastor repeated it again and said, " No, the milk comes from the Bull." Then others were coming up to her and telling her that the "milk comes from the Bull". So she would keep repeating, "Its not true, it cant be. Milk comes from Cows". Before she knew it, there were thousands there telling her that milk comes from the bulls. She began to doubt herself and ask, "Is it true? I guess milk really does come from bulls" and began to believe what paster and other religious leaders were saying. Then, she said, "I saw two young men come down from a hill in white shirts, ties and the black name tag. They came over and made their way through the crowd and came up and gave me a big hug and whispered in my ear, "Milk comes from the cow". She said that she felt a great relief come over her to know that some one else had the same views as she did that knew the truth. Its just an example of how we need to hold on to what we believe, even if everyone else is telling us different and to hold strong until help comes to testify to you that you are right.

We passed by all of the investigators who had a baptismal date for this week and we taught them so that they could be ready and excited to go to church. When Sunday came around, only one of the families went to church. We passed by for them and walked with them. The other two said that they would go when we called them in the morning, but they never showed up! It was kind of a bummer because they were going to be baptized this weekend but they need to go to church the Sunday before their baptism. We are going to be making changes to those dates.

Our zone won the mission competition of having the most baptisms in the mission so we get to go eat dinner with president as a zone and we are going to the temple tomorrow morning!!!!
Posted by threetoadsandaprincess at 2:43 PM 0 comments 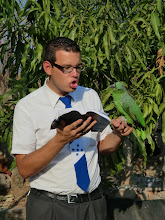 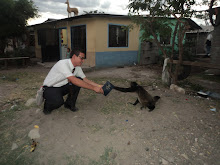 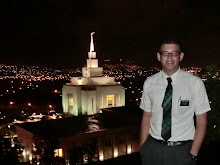 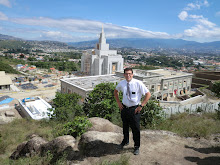 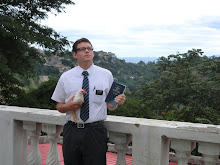 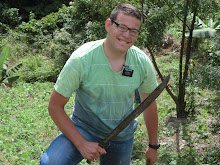 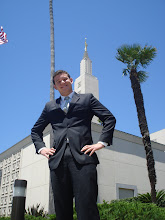 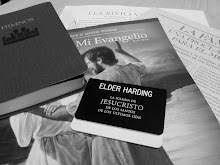